Flowers and plants give us the inspiration and energy to carry out our job. Every day in our salon, we create the most perfect mix of these precious elements for our clients, revitalising their hair thanks to our Conlemany method. “Conlemany” is our philosophy, a mental attitude supporting nature and eco-sustainability on our planet; a set of pure elements, with which we completely replace traditional chemical cosmetics.

The atmosphere of our salon brings you back to our primordial status, no plastic, no synthetic chemicals, just a respectful and pure environment.
Organic Italian Hairdressing is not just an ordinary hairdresser but it is an experience, as when you enter into a forest or look at the sea or the sky and everything around you seems to smell of joy and peace. 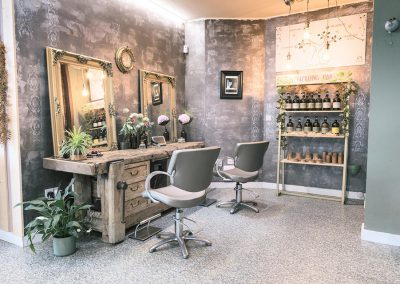 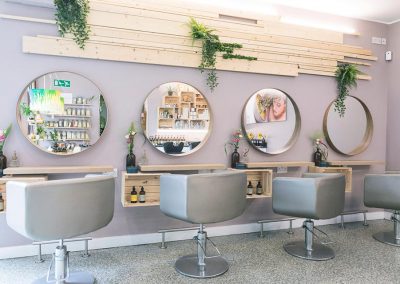 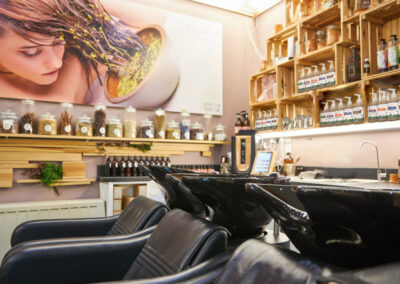 Francesco began his career at a very young age in 1982, working in an important salon in the centre of Treviso, Italy. He began his education in the A.N.A.M academy in Treviso from 1982 to 1985. At the end of the 1980s, he opened his own salon and continued his studies in the 1990s, attending various courses on the most original techniques on colouring and cutting hair. To broaden his experience, he changed academies and attended U.A.A.A.I in Treviso, obtaining a Master of Arts diploma, firstly in male hairdressing and in 1995/1996 in female hairdressing.

At the beginning of the 2000s, he attended the Alfaparf Milan master course “LYCEUM GDR” in Bologna, studying with the “PRIMIERI HAIR” group from Perugia, where he met the artistic director Carlo Primieri. With Carlo he began his career path which led him to a hair stylist job for an exhibition in Brescia. During his LYCEUM experience, he studied and collaborated with the Milan group “WINTERS”. Later he joined the Alfaparf Milan “TEAM TEACHER” running many hair styling performances in different Italian cities for several years.

Francesco took part in “LOOKS” 2003 in Rimini, performing in front of 4,000 people. The following year he collaborated backstage for a show with LOUIS LLOUNGUERAS as part of the professional exhibition in Rimini. He was selected to run an Alfaparf ACCADEMIA ITALIANA project in Rome and Milan, joining the artistic group and establishing himself as a stylist.
He works with IVANA MARGARINI, a stylist from Cuneo, and together they founded CHAIN IN ART ACCONCIATURE S.A.S and established the FASHION COLLEGE school and the MOODY ARTINSIDE artistic group. Some of their works have been published in LA GRIFE, ESTETICA, MODA E CAPELLI, and GLAMOUR over the course of their artistic careers.

In the second half of the 2000s he became the artistic manager for MAXWELL in Asti, taking care of fashion shoots, fashion shows and professional seminars. Ivana and Francesco work together on the creation and development of the organic Conlemany (which literally translates into with the use of hands) method, a new concept for hair styling that is 100% natural and has zero chemicals. In November 2017, Francesco moved to Ireland with IVANA MARGARINI and created OI ORGANIC ITALIAN HAIRDRESSING in Dalkey, Dublin.

Ivana began her career in 1982 as an apprentice in a salon in the heart of Cuneo. In 1986, she moved to London where she worked in several trendy salons in the city such as “TUSK” and “MISS SELFRIDGE” where she met STEVE GREGGAN, MADONNA’s personal hair dresser. Steve shared his work with Ivana and they also shared Madonna’s friendship.
Her professional career grew in the “ALAN INTERNATIONAL” academy where she was a top stylist. In the 1990s, she returned to Italy to manage the “FERRETTI PARRUCCHIERI” school in Pescara and then opened her first salon in Limone, Piedmont.

In the 2000s, she went to the LLOUNGUERAS school in Barcelona and the following year she joined the LYCEUM GDR project in Bologna and Riccione for “ALFAPARF MILANO”.
Ivana studied and worked with hair styling groups such as “WINTERS” in Milan and “PRIMIERI HAIR” in Perugia. She continued her career in the following years attending “L’INTERNATIONAL” in Bologna, Florence, and Rome studying with international famous hair stylists such as RIZO’S, COBELLA, and NICK GIARGINO.

Ivana opened her second hair salon in the heart of Cuneo and was hired to create the “ACCADEMIA ITALIANA” project with “ALFAPARF MILANO”, establishing herself as a hair stylist in various Italian cities. Her efforts in the academy gave her an opportunity to teach hair colouring and cutting designs for several years, in various Italian cities. With the same group, she worked with FRANCESCO PICCOLO from Treviso, and together they carried out many photographic services in Milan which were published in specialist magazines such as LA GRIFFE, GLAMOUR, MODA CAPELLI and ESTETICA. With Francesco, they founded CHAIN IN
ART ACCONCIATURE.

In 2005 she established the FASHION COLLEGE school and the MOODY ARTINSIDE artistic group. In the second half of the 2000s she became the artistic manager for MAXWELL in Asti, taking care of fashion shoots, fashion shows and professional seminars. Ivana and Francesco work together on the creation and development of the organic ConLeMani method, a new concept for hair styling that is 100% natural and has zero chemicals. 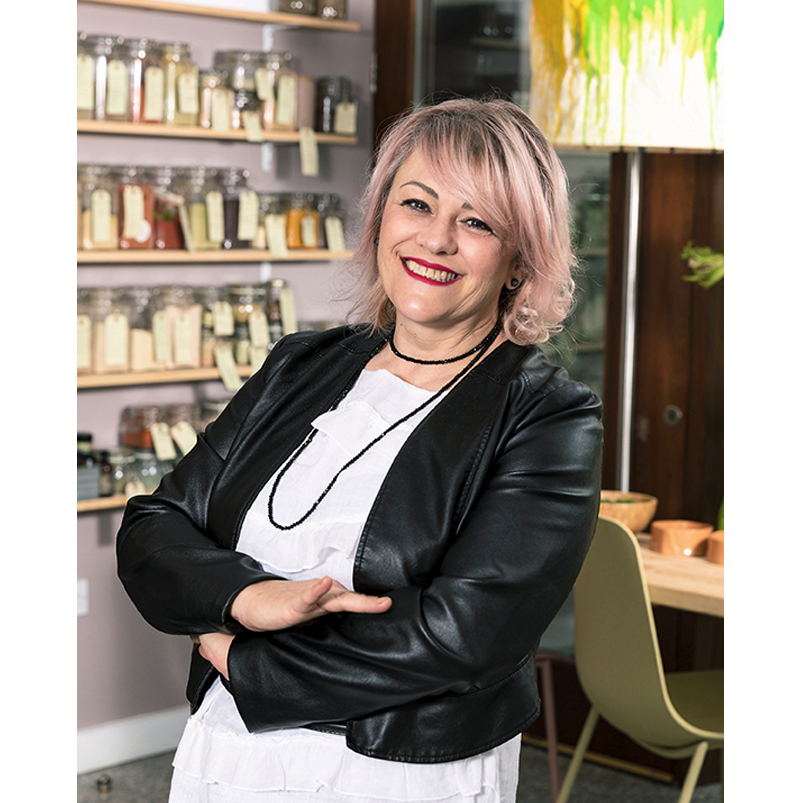 Ivana and I met each other in Rome in 2004 when we were hired by “Alfaparf Milano” to create a wonderful and interesting national project in the hairdressing field.

In the following two years, after having attended two master courses in Bologna and Rimini, studying together with stylist teams from Perugia and Milan, we were chosen by the artistic manager to take part in the “ACCADEMIA ITALIANA” project, establishing ourselves as hair stylists in various Italian cities.

For us and our colleagues from all over Italy, “ACCADEMIA ITALIANA” represented a very significant moment. We always like to think the experience we gained over many years of commitment and dedication results from all of our hard work and efforts; from every word spoken and learned, from every piece of work shared or kept to ourselves alongside our collaborators, colleagues, technical and artistic directors who we have met so far.

Thanks to our passion, from 2010 until present, we created Conlemany, our personal work method that has zero chemicals and is 100% natural and organic.